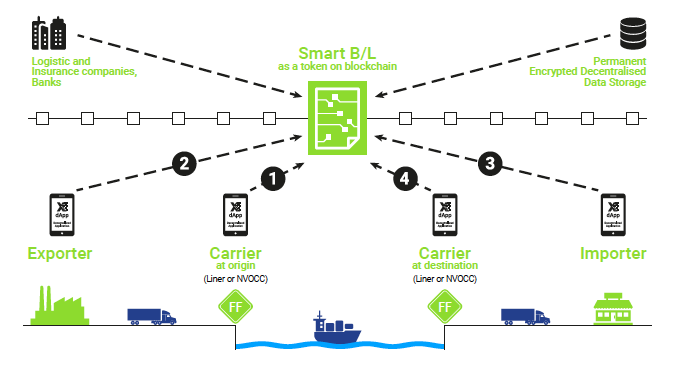 It is fast, efficient and straightforward-just like us. Which is why we are offering to generate blockchain-based bills of lading for our customers – the TA smartB/L. Why bother?

A bill of lading is one of the most important documents in logistics because you can only assert a claim to the goods it relates to at the port if you are in possession of it. Sounds complicated – and it is. Because it inevitably entails the consignor having to send the bill of lading to the consignee by other means. That takes time and wastes money. Not to mention the upheaval if a bill of lading happens to go astray.

This problem can be solved in the future by the TA smartB/L, which we are offering via the CargoX platform. This means that everyone involved – from the consignee and forwarding agent to the consignor – can be taken on board using blockchain technology. The advantage: The bill of lading does not have to be sent separately. Which saves time and money. Besides which, it provides an additional safeguard because everyone just has the rights that are actually assigned to them.

Which is why we are offering our customers a platform where they can manage their documents – the TA smartB/L – making us one of the forerunners in Europe, since only a handful of logistics service providers offer this pioneering service with CargoX. All the others are still sending valuable bills of lading around the world, wasting time and money, while our customers can manage everything conveniently with just a few clicks. Like we said, fast, efficient and straightforward. Just like Trans Auriga.